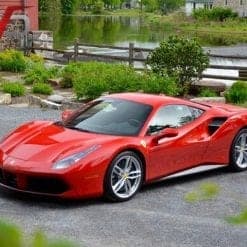 Lyon is an ancient city that is steeped in history and is just waiting to be explored. Back in Roman times it was even the capital of Gaul, (France), but nowadays, despite being well connected and benefiting from an international airport, Lyon is often forgotten or overlooked by visitors and that’s a mistake. With the snowy Alps to the east, two famous wine regions nearby, a vibrant gourmet scene and some of the best preserved ancient ruins you´ll find anywhere in the country, this historic city has a lot to offer and the most exhilarating way to discover it all is from the driver’s seat of a supercar, like a Ferrari rental Lyon.

Explore in a Ferrari Rental Lyon

Arrange a Ferrari rental Lyon with Europe Luxury Services and venturing around this stunning French city is guaranteed to be a thrilling experience. You might arrive at its charming old-town to take a stroll along its ancient road or pause to appreciate the stunning views from the striking Notre-Dame de la Fourvière Basilica on Fourvière Hill. Then again, you might prefer to take a tour of its two well-preserved Roman amphitheatres before enjoying some traditional French cuisine at one of its mouth-watering eateries.

If you´re keen to take your Ferrari rental Lyon out on the open road to explore a little further afield you could head to the wine regions of Côtes du Rhône or Beaujolais and enjoy an afternoon of wine tasting at a world-class vineyard, or if it´s fine dining you are after then the Michelin-starred Auberge du Pont de Collonges restaurant, which is headed up by famous French chef Paul Bocuse, can be found just ten kilometres outside of the ancient city.

Other top attractions include the Musée des Beaux-Arts, which is considered the next best fine arts museum in France after the Louvre; the Musée Miniature et Cinema, which includes minute models and Hollywood movie props; or the History Museum, which records the city´s progression from antiquity through the Middle Ages and Renaissance up to the 20th century.

Wherever you plan to venture, you are guaranteed a thrilling experience when you are in the driver´s seat of a Ferrari rental Lyon, so the only question that remains is which prancing horse will you choose?

If you want to experience the pure exhilaration of driving the perfect mid-engined V8 Italian supercar, then a Ferrari 488 rental Lyon fits the bill perfectly. Renowned for being both beautiful and blindingly responsive, it hugs the road and fills you with confidence, while turning a few heads along the way. However, if you are traveling during the summer months, you might prefer to take in the sights and smells of the city with the roof down. In which case, a convertible like the Ferrari 488 Spider rental Lyon could be just what you are looking for. Rent a Ferrari 488 Spider Lyon and enjoy a blend of stylish design, raw performance and open-air fun that is guaranteed to get your pulse racing.

The again, perhaps the exhilarating speed of a V12-powered beast like a Ferrari 812 Superfast rental Lyon is what really gets your pulse racing?